Here are some useful acronyms you might want to take note of.
Click on the the acronym to LEARN its meaning. 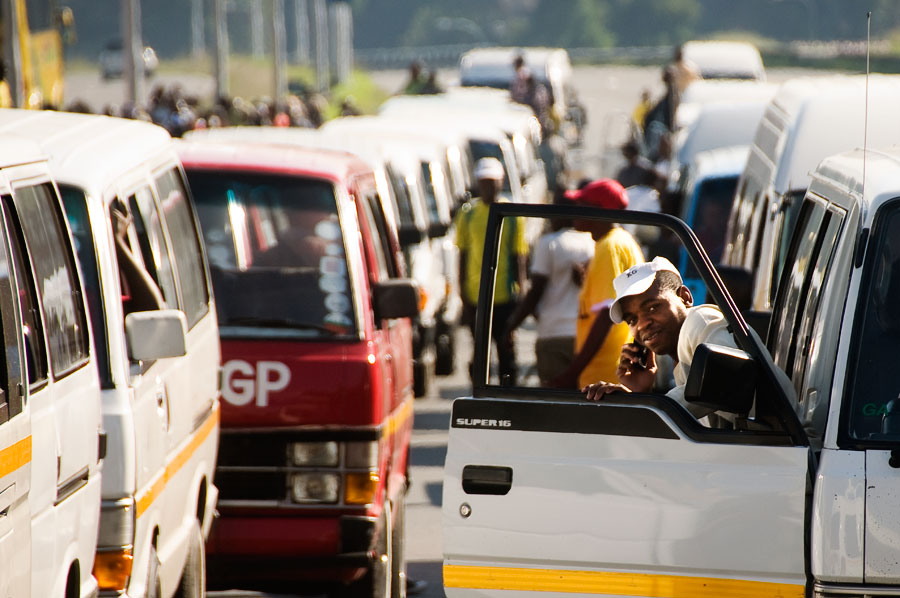 The minibus taxi industry is a massive industry

with an aggregate turnover of more than R100 billion per annum generated from multiple channels including but not limited to:

There are estimated to be around 80,000 taxi owners operating more than 250,000 mini and midibus taxis and employing more than 200,000 direct employees mostly as drivers, queue marshals and assistants.

These estimates exclude the indirect jobs and other job opportunities the mini and midibus taxi industry (MMTI) creates through the multiplier effect in related industries.

The fact that the MMTI is almost exclusively owned and operated by blacks, represents the successful implementation of an ideal black economic self-empowerment model.

However, despite the MMTI’s impressive turnover and employment statistics, taxi operators are short-changed as they mainly participate as consumers in their own industry while other stakeholders, particularly large established suppliers and service providers hold the greater share of the market.

To this end, the Department of Transport’s (DoT) initiative to introduce and implement a commercially viable Revised Taxi Recapitalisation Program (RTRP) management solution that will leverage and exploit opportunities available in the MMTI’s entire value chain with taxi operators as active participants is a welcome intervention.

Ultimately, the MMTI should use its buying muscle to participate meaningfully where the ultimate goal is to own elements within the value chain such as vehicle distribution and retail, vehicle financing institutions and insurance companies, vehicle tracking companies, as well as fuel retailing operations, electronic fare collection systems, and property and facilities management companies.

A showcase of some of the elements we intend to introduce as part of a commercially viable RTRP management solution that will leverage and exploit opportunities available in the MMTI’s entire value chain follows hereunder: 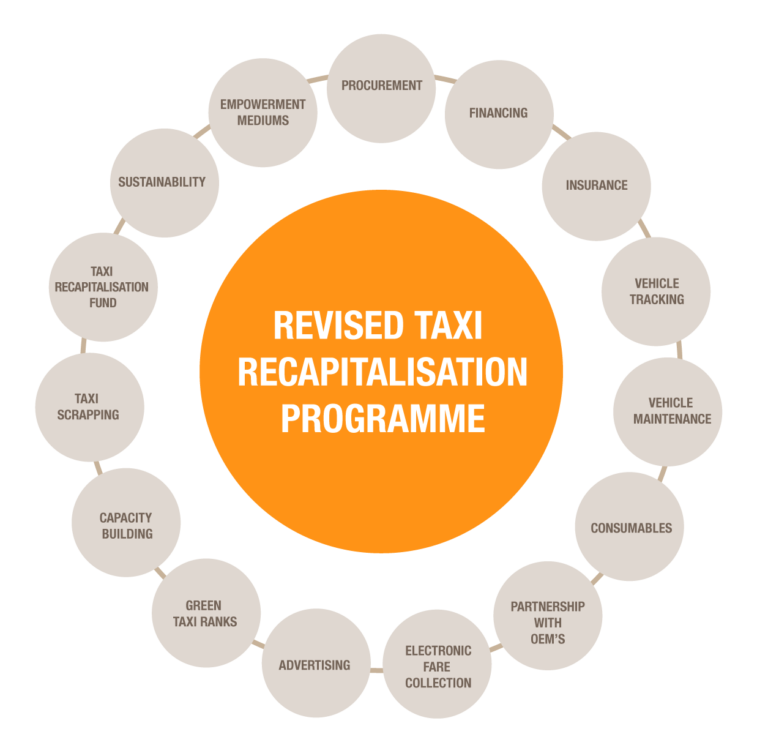 Click on the links below to navigate to the topic you wish to read:

The oligopoly associated with vehicle supply within the MMTI results in inflated vehicle costs which undermine the sustainability of the MMTI. One of the main challenges reiterated in the TRP review confirmed that higher prices make compliant and durable NTVs unaffordable

The MMTI is to leverage its enormous buying power to reduce NTV procurement input costs and utilise its buying muscle to achieve a level of participation in the assembly and manufacturing of NTVs.

Measures to enhance the progressive sustainability of the MMTI in the short-to-medium term include but are not limited to the following:

In order to tap into this to leverage the enormous buying power, unification of the MMTI is a pre requisite.

Currently the taxi industry is characterized by tailored insurance products that are underwritten by major insurance providers and promoted through insurance brokers.

The nature of the cover and the associated costs of the monthly premium differs from product to product and taxi operators are required to discern the suitability of each product offered, to their individual requirements both in extent of cover and cost of monthly premium. The fragmented nature of the take up of insurance products does not currently present any pricing advantage to individual taxi operators as their collective buying power is not being realized.

It is imperative that the collective purchasing power of the MMTI is harnessed to design a bespoke industry specific insurance product at reduced monthly premiums to cover:

All financed new taxi vehicles purchased will include mandatory comprehensive insurance for the duration of the financial agreement as well as a GPS enabled Electronic Vehicle Management device (EVM). The EVM device will allow more than simply tracking, monitoring and recovery assistance. It would also allow taxi operators to manage their operations more efficiently.

Routine maintenance and repair is an essential component of the MMTI, not only to increase the life span of taxi vehicles, but enhancing their roadworthiness and passenger safety as well.

Routine quality maintenance also contributes towards the profitability and sustainability of the MMTI by reducing operating costs and increasing efficiencies.

Unfortunately, most taxi operators do not always carry out maintenance in accordance with Original Equipment Manufacturer (OEM) standards and specifications due to the generally higher costs associated with OEM accredited spare parts and accredited repair centres, and the arduous hours of MMTI operations.

Taxi operators then often compromise regular maintenance and prejudicing commuter safety by cutting corners such as:

The objective is to:

Ideally the MMTI should be in a position to develop its own supply network, including the direct ownership and operation of home based sites equipped with fuel storage and dispensing facilities and on-road petrol stations.

The MMTI is the most accessible mode of public transport and currently commutes at least 69% of South Africa’s daily commuters.  This presents an opportunity to monetize a GPS location-based media platform that allows large as well as local businesses to reach captive commuters through audio and text-scrolling messaging onboard vehicles. Campaigns can target an area or economic sector more directly than most other forms of advertising and are cost effective compared to other forms of outdoor advertising.

There are many OEMs represented in South Africa where more than 20 OEMs supply vehicles to the MMTI.   This affords an opportunity for the MMTI to use its buying muscle power to:

Taxi ranks are key business hubs serving several ends such as being the initial and terminal points of travel, serving as places of social gathering, shopping and trading within local communities, and as such need to be fully facilitated to accommodate this thoroughfare.  Estimates place mini and midibus taxi commuter trips at 15 million daily as used by 10 million households. This translates into a huge volume of traffic passing through taxi ranks every day.

Currently minibus and midibus taxi ranks are typically characterized by inadequate facilities – such as kitchens for food preparation, seating facilities for eating, shelter against the elements, ablution facilities and wash bays for vehicles.

Ideally the MMTI should be in a position to invest not only in taxi ranks that accommodate all users, but also provide adequate facilities who are responsible  for the management of the cleaning, security and maintenance of taxi ranks. It should also invest in green taxi ranks that are environmentally friendly facilities that are energy efficient with adequate alternate renewable energy sources thus saving on operational costs daily.

Green initiatives should include:

As part of an RTRP capacity building initiative, a “RTRP Skills Development and Transfer Strategy” will be in place prior to the transfer of TRSA equity share to the MMTI Trust.

The envisioned strategic document will serve as a guideline on the necessary skills required by the MMTI to successfully run a project similar to RTRP.

The strategy document will include clear terms of reference for the MMTI which will include amongst others, the following:

The ultimate objective of the MMTI Trust is an economically viable sustainable powerhouse with the proven capabilities to govern the new entity.

The Department of Transport’s physical scrapping component to address the ageing and unroadworthy mini bus taxis is ongoing.For more information on this process CLICK HERE

The realisation of the commercial components are the foundation for the MMTI to gradually reduce financial reliance on government, ultimately achieving a goal of complete sustainable financial independence.

This fund will be established and sustained through amongst others, a significant share of the revenue generated through the value add initiatives in the aforementioned paragraphs.

Prerequisites for progressive sustainability of the minibus taxi industry

For an industry that is a major player in the transport sector, it operates on an informal basis.  In order for the MMTI to be a successful commercial venture, the industry needs to be formalised to reap the full benefits that is customarily conferred on a legitimate organisation.

By and large, this ownership and management model is at the heart of the endemic conflict and violence which has plagued the taxi industry for decades. The reason for this is because the MMTI’s profitability and sustainability has been under pressure for decades due to a myriad of factors, including uncompetitive (not market related) fares, overtraded routes (oversupply of taxi vehicles, both legal and illegal) and increased competition from other modes of transport (buses, BRTs, trains, private cars, etc.).

The MMTI’s profitability and sustainability challenges are exacerbated by the fact that unlike other modes of transport (buses, trains and air), the MMTI does not receive an operational subsidy from government. The lack of subsidization is partially attributed to the MMTI’s informal cash-denominated operations which are devoid of any commuter statistical records. The MMTI will continue to come under increasing revenue pressure as input costs such as financial, insurance, operational, maintenance, recapitalization and inflationary costs, escalate.

The introduction of the TRP has offered the MMTI some welcome financial relief, but this is not a sustainable reprieve. Unless the MMTI’s profitability and sustainability challenges are resolved, rivalry, conflict, strife and even violence will continue to be a regular feature within the MMTI operations as factions of taxi operators are forced to compete for the crumbs of a shrinking pie.

The envisaged end state of the taxi industry’s commercialisation will follow a phased approach, either through co-operatives or single corporate structures.

The elements described above, with exception of the taxi scrapping are envisaged solutions.